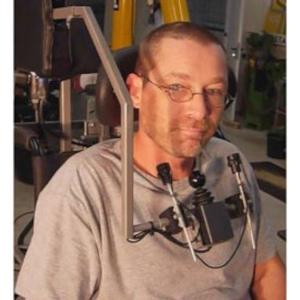 Description:
Chin control consists of a joystick and 2 buttons. The joystick is equipped with a large soft ball as standard. This ensures good and injury-free contact with the chin. The two buttons are located on the side of the joystick (one on the left, one on the right) so that you can easily reach them with your chin.
A monitor with all necessary information such as the current driving level, battery level and settings is attached in front of one of the armrests. The page is freely selectable.

Function and operation:
The joystick can be moved continuously in all directions and is used for control in driving mode, for selection in the menu and for changing the existing seat settings.
One of the two buttons next to the joystick has the function to switch the wheelchair on and off, while the driver can click through the menu with the other button.
If you are in driving mode and press the menu button to change you go to a higher gear first. After the highest level has been reached, the wheelchair menu follows. The lighting and settings of the seating system are located there. One click on the button and the driver reaches the 1st gear again. All functions and settings are shown on the display on the armrest.
The chin control can not only be swiveled independently by the driver from above over the head downwards and back again, the joystick can also be swiveled closer to her chin in the lowered position. So you have the possibility to put the joystick in the optimal position for you.

The movement of the complete control is controlled by 2 buttons which are integrated in the sides of the headrest. If you hold down one of the buttons, the control first moves from the top down over the head and then moves closer to you. With the button opposite, the movement is exactly opposite, first the control moves forward and then upwards. If you let go of a button, the movement stops exactly in the position in which the control is at that moment.
The two buttons are so far apart that you can lean your head against the headrest in any position. The positioning of the control is possible even if you have switched off the normal control with the button on the joystick.

The journey
Since the joystick can be moved continuously in any direction, the wheelchair can be controlled precisely. The acceleration and speed depend entirely on the movement of the joystick. So the driver can drive slowly even in the highest gear by moving the joystick only a little. The top speed of the selected speed level can only be reached when the joystick is moved to the stop.
It can be driven without problems in buildings. Outside, depending on the flooring, it can be a shaky affair. Due to the design of the control system, the driver can rest his head on the soft ball on the joystick while driving. This not only saves energy, but also prevents the well-known stop-and-go of the wheelchair in the event of many unevenness in the floor.

Price (without guarantee):
On request from: Sales

The translation of the content is performed by the external website Google™ Translate.
The service provides automated computer translations.
REHADAT assumes no reponsibility or liability for the complete accuracy of the content.

See if other information resources are available on this type of products:

Based on expert resources provided by the following Organisations:

Also with the help of the EASTIN Associate Partners and National Contact Organizations from many countries across the world.