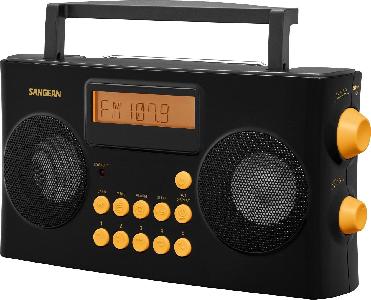 - The Sangean PR-D17 is an FM / AM portable stereo radio that has been specially developed for the blind and visually impaired. The device is black and has bright yellow control buttons.
- The operation is supported by spoken messages in Dutch, English, French, German and Spanish. The manual is also available in the same languages.
- When switching on the radio station, the battery level and the menu are spoken.
- The built-in alarm clock is also supported with voice messages and the alarm signal can be either the radio or a buzzer.
- 10 preset stations can be set: 5 for AM and 5 for FM.
- The radio itself searches for available channels.
- When an FM station offers the RDS service, the icon appears on the display and the display shows the station name and then the radio text (if available).
- A sleep timer is also built in.<
- There are two built-in speakers on the front, an illuminated display with large characters, 11 keys with tactile marks and a red light that comes on when the battery level is low.
- There are two large knobs on the right-hand side for tuning the channels and controlling the sound volume.
- The extendable antenna and a folding handle are located on the top.
- There is a battery compartment on the rear with space for six 1.5 V batteries.
- On the left side is the connection for the 9V adapter, the headphones, the aux input (external sound source, for example MP3 player) and a stereo mono selector.
- Included: 9V mains adapter
- Dimensions: 260 x 136 x 63 mm
- Weight: 915 g
Producer
SANGEAN
Taiwan
Web: https://bit.ly/399QCTs
Suppliers and prices
Belgium and the Netherlands: generally available, target price 129 euros
(January 2020, including VAT)

See if other information resources are available on this type of products:

Based on expert resources provided by the following Organisations:

Also with the help of the EASTIN Affiliates and National Contact from many countries across the world.